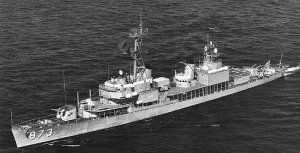 James “Jim” Gillooly passed away on September 5, 2020 at his home in Fruita.  He was 85.  He was born in Montrose, PA to Bernard and Beatrice Gillooly.  He grew up in rural Pennsylvania on his family’s farm, signing up for the US Navy prior to graduating high school.  During his tour, Jim served on the USS Hawkins while it provided support in the Korean War.

After his service in the military, Jim returned to Pennsylvania and spent many years there.  Jim always had an enterprising and industrious spirit. He worked for IBM for several years in nearby in Endicott, NY while operating multiple small businesses in the Choconut, PA area.  Jim moved to Colorado with his wife Joyce and their two youngest daughters in June 1981, first moving to Pueblo and later to the Grand Valley.  Jim and Joyce owned two businesses in Grand Junction prior to their retirement, but Jim still wanted to stay busy.  He shuttled rental cars for Avis for quite a few years, allowing him to enjoy camaraderie with his fellow drivers as well as enjoy the Colorado scenery.

One of the primary reasons Jim moved to Colorado was for his love of the outdoors, particularly hunting and fishing.  After retiring from work Jim went on several big game hunts, including trips to Alaska and Africa.  Jim also enjoyed traveling with Joyce, watching hockey and learning about taxidermy.

A memorial service will take place on Wednesday, September 23rd at 10am at Brown’s Cremation and Memorial Service Chapel.  Honors Ceremony will follow at Veterans Memorial Cemetery at 1pm.

To send flowers to the family or plant a tree in memory of James Edward Gillooly, please visit our floral store.