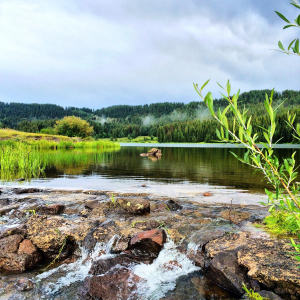 Edward “Eddie” Kirk Roemer Beloved husband, son, brother, father, and friend Kirk Roemer of Grand Junction, CO passed away while fly fishing in Creede, CO on June 3rd, 2021. He was 57. Gone way too soon, but he was doing what he loved. Kirk was born January 23rd, 1964 in Wheatridge, CO to Bruce and Cathy (Miller) Roemer. He grew up in Wheatridge and Arvada, CO. He graduated from Arvada West High School in 1982. He attended what was then Mesa State College earning an Associate of Science degree in 1994, and his Bachelor of Science Environmental Management from Columbia Southern University in 2001. He began his work in environmental science with Bendix in 1985 and the uranium mill tailings project. He went on to work with Oakridge National Labs, Portage Environmental, Navarro Research, and RSI Entech. Kirk was most recently the site lead for the Grand Junction Disposal Site. He made many friends and gained some family in his career. Kirk married Raelynn (Franks) Roemer October 1, 1988. They remained devoted partners for the last 32 years. Alexis Rose (Roemer) Gallegos was born in February 1992. Kirk was never more proud than to be her father. His grandchildren, Liam Edward and Stella Rae, were the light of his life. Kirk was an avid fly fisherman, was always the happiest when he could be with his friends on the Roaring Fork river casting flies. He also enjoyed golf, barbeques, family and friends, bourbon, and red wine. His door and heart were always open. Kirk is survived by wife Raelynn, his parents Bruce and Cathy Roemer, daughter and son-in-law Alexis and Ian Gallegos, grandchildren Liam and Stella Gallegos, sister and brother-in-law Dana and Eric Cooper, mother-in-law Linda (Franks) Siedschlag, brother-in-law Robbie (Missey) Franks, sister-in-law Rhonda (Randy) Rogers, numerous nieces and nephews, and just too many friends to count! It is widely known his favorite word started with an “F”. Kirk’s arrangements are being handled by Brown’s Cremation Service. In lieu of flowers the family has set up an account for donations to his grandchildren, who were his biggest source of pride and delight, and will continue PopPop's legacy. https://www.gofundme.com/f/expressions-of-sympathy-in-mimoriam-of-kirk-roemer

To send flowers to the family or plant a tree in memory of Edward Kirk Roemer, please visit our floral store.