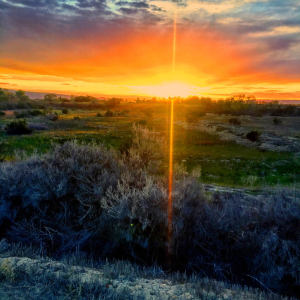 While attending Grand Junction High School Larry met and married the love of his life, Darlene Faye McBride on July 14, 1956.  Larry served in the U.S. Navy from 1954 to 1958.  Larry was stationed in Boston Massachusetts, and served on an ice-breaker, The USS Edisto AGB-2.  After his discharge from the Navy, Larry and his wife moved back to Grand Junction, Colorado where they raised their family.

Larry was a true outdoorsman. He enjoyed hunting, fishing, camping with his family, traveling with his lovely wife, and an occasional glass of Black Velvet. Larry always had a great sense of humor.  He was a practical joker, a great storyteller and always good for a few laughs.

He worked as a factory representative for Brown and Williamson Tobacco Company for approximately ­­­­16 years.  In his later years, Larry worked as an au­­to-parts salesman around the Grand Valley.

Preceded in death by his parents and his brother Tom.  He is survived by his sister Terry, brother Bill, his loving wife, Darlene, his three children; Rick (Cyndi) Castonguay of Grand Junction, Lynn (Brad) Miller of West Jordan, Utah, and Kathy (Chuck) Brumbaugh of Whitewater, along with four grandchildren; Chad, Cortney, Arron and Nichole, and five great-grandchildren; Tyren, Talen, Presley, Risten, and Braxton.

A Memorial service for Larry will be held Friday, September 13, 2019 at Brown’s Cremation & Funeral Services 904 N. 7th at 1:00 p.m. followed by a Veteran Committal Service with Honors at the Veteran’s Memorial Cemetery 2830 Riverside Pkwy. Family and friends are welcome to join the Castonguays’ after services at Canyon View Park, at the east side pavilion for a celebration of life.